While the U.S. struggles with the controversy over the ban on travelers from seven mainly Muslim countries, France provides a source of cross-cultural diplomacy at the Islamic Art Collection at the Louvre, the most visited museum in the world.

This initiative was the brainchild of President Jacques Chirac, who vigorously opposed the Iraq invasion, and called for a “dialogue of cultures” to break down misunderstandings between the West and Muslim world with its petroleum rich regions. 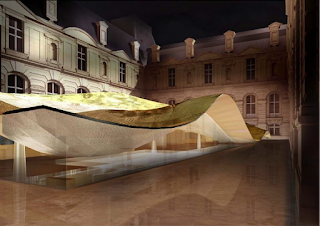 The new wing opened in 2012, at a cost of a hundred thousand euros, co-funded by Arab states. Like the glass pyramid, the project came as a shock, thrusting together the medieval Western style and a contemporary design in a powerful frisson. A vast, undulating canopy of steel, glass and perforated aluminium hovers over 3000 works, the best Islamic art in Europe. Technology and art converge in poetry that suggests the rolling dunes of the Middle Eastern landscape, the veils of dances or even a flying carpet!


The architecture itself asks how we combine the old world and the new? The West and the East? It also supplies the answer that in a cosmopolitan world capital, diversity is welcome.

International commerce has always caused cultures to mingle as the collection shows. It is an Aladdin’s cave of ivory, stone, glass, metalwork, ceramics, textiles, carpets and manuscripts. Since the glory days of Islamic art, countries were bound together on the trade routes from the Silk Road, and the Persian Royal Road that ran from China to Egypt and brought together Arab, Spanish, Chinese, Indian, Maghreb, and Byzantine motifs. 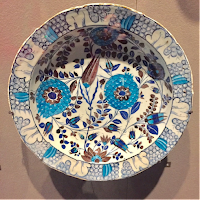 One example of trade influences between East and West was the tulip motif, and trade in the bulbs. The tulip stands for Allah, the its yielding stem also represents worshipers at prayer. The name tulip probably comes from the Turkish word tuliban, meaning turban, (tulipa in Latin) since the blooms resemble an inverted turban. Originating in Pakistan, but domesticated in Turkey, tulip bulbs were exported to Holland and by the early 17th century became all the rage. During the time of “tulip mania,” Dutch prices for bulbs reached extraordinary levels and crashed. There was also vigorous trade in these beautiful ceramics depicting tulips and other symbols of Islam.

Both Islamic and Christian motifs adorn a masterpiece 14th century brass basin inlaid with silver and gold. It started as as a Mamluk banqueting bowl, only to find itself later in France, where it was used to baptise French royal children. The French may not have known that the fleur-de-lis and hunting scenes were as symbolic to Islam as the French monarchy. The basin was used to baptise King Louis IX, later Saint Louis, himself an embodiment of the Church and monarchy.

At this Louvre collection, there is plenty to capture the imagination and shared humanity. Admiring a display of elegant, elongated Persian vials curiously meant for holding tears, a woman next to me said, “I could fill all of those.” Her recognition of despair and empathy in these ancient objects shows how art transcends centuries, religions, differences of opinion, borders East and West, and shows our essential longing for harmony, creativity and peace among people.

This card entitles you to unlimited access to the Louvre, access to other museums on special Amis du Louvre days, reduced rate on the Musée d'Orsay's Carte Blanche, as well as discounts on lectures, conferences, concerts, films, books and restaurants. The special WICE member price is €70 for a single membership and €100 for a joint membership (as of January 1, 2012). For more details, please refer to your membership package. Please contact the WICE office on 01 45 66 75 50 or click here to subscribe.