In all its fabulousness, Paris can get tiresome. When in need of a tranquil escape, we recommend Giverny, where Monet and his family settled in 1883. You can visit his house and gardens. There are two parts in Monet's garden: a flower garden called Clos Normand in front of the house and a Japanese inspired water garden on the other side of the road. 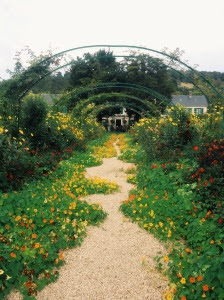 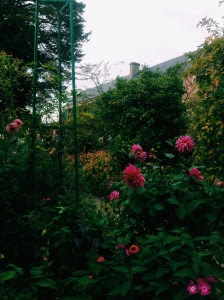 the Clos Normand gardens with the house in the background 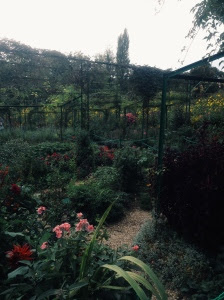 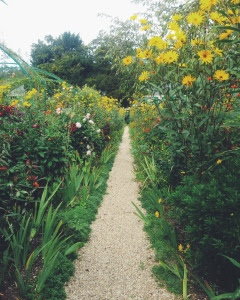 The two parts of Monet's garden contrast and complement one another. In 1893, ten years after his arrival at Giverny, Monet bought the piece of land neighbouring his property on the other side of the railway (where the road currently runs). With the support of the prefecture, Monet had the first small pond dug ; even though his peasant neighbors were opposed. They were afraid that his strange plants would poison the water. Later on the pond would be enlarged to its present day size. The water garden is full of asymmetries and curves. It is inspired by the Japanese gardens that Monet knew from the prints he collected avidly. 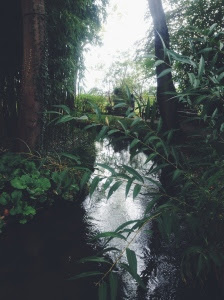 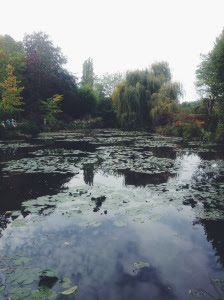 In this water garden you will find the famous Japanese bridge covered with wisterias, other smaller bridges, weeping willows, a bamboo wood, and above all the famous nympheas (flowers) which bloom all summer long. The pond and the surrounding vegetation form an enclosure separated from the surrounding countryside. Never before had a painter so shaped his subjects in nature before painting them so he created his works twice. Monet would find his inspiration in this water garden for more than twenty years.
After the Japanese bridge series, he would devote himself to the giant decorations of l'Orangerie museum, which we suggest paying a visit to prior to Giverny. It was really cool to see the real thing after seeing the artist's impression of it. Always looking for mist and transparencies, Monet would dedicate himself less to flowers than to reflections in water, a kind of inverted world transfigured by the liquid element. This really comes through in his paintings in l'Orangerie. 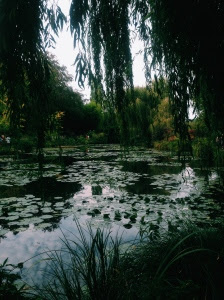 Upon exiting the house and garden grounds, you are greeted by the town of Giverny.
As you can imagine, tourism is the town's main source of revenue, revolving around the famous painter's abode. 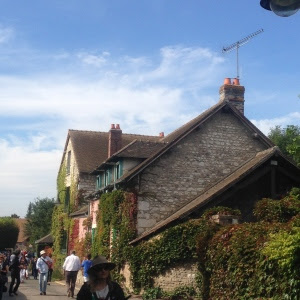 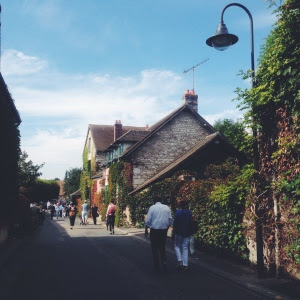 There was a flea market that we believe takes place every Sunday that went for miles. Miles and miles of stands selling the same exact things. You could find utensils, plates, glasses, clothes, electronics, and old antiques -- chairs, tables, unidentified objects of standing furniture -- as well as old family memorabilia.
We recommend packing a picnic, strolling around the gardens, and then plopping down on a particularly enticing spot along the flea market to enjoy your food.
Before hopping the train and returning to Paris, to be again reminded why you came here in the first place: 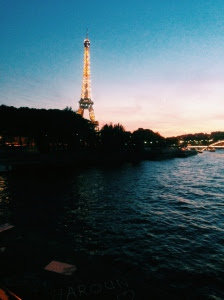 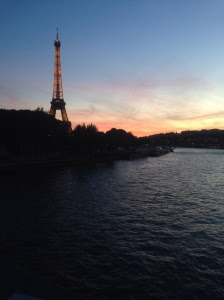